On Fear, Making Comparisons, and Cushions 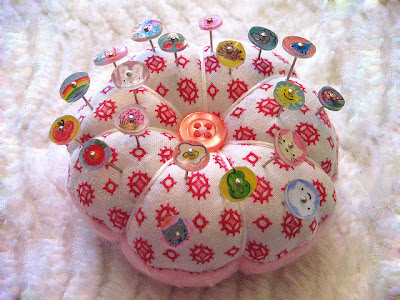 Sometimes people who think differently from me are my best teachers. It's not necessarily because I adopt their beliefs, but because I'm forced to examine what I think and feel more closely.  I'm usually good with the thinking part; these days, though, I'm trying to get closer to the feelings.

Doing this can mean stopping to let things settle and to open some space around me.  "Sitting with your feelings," my yoga teacher calls it. At first this sounded easy to me, until I realized that it meant sitting with my painful feelings, not just my joyful ones. Ugh.

I had one of these "opportunities" recently, after a conversation with a friend about cushions --the financial, not the sofa, kind. Some single (as in non-partnered) people, my friend said, think that it's easier for one member of a (partnered) couple to make a major change --say leave a job or change careers-- because the other half of the couple is there to hold the financial fort (the "cushion").

My initial reaction, truly, was to laugh.  And I might have if I hadn't immediately been sucked into the comparison she'd made, at which point I started winding myself as tightly as a watch spring (do watch springs even exist any more?). Bad stuff, the comparison thing, but more on that later.

First, some background: In the past ten years my life has taken major turns that continue to surprise, delight, and scare the bejeezus out of me. For starters, eight years ago I got married. My husband and I are very different from each other. Probably because of these differences, he's profoundly --in a good way-- affected how I think about what's possible.

Four years later, I left a corporate environment that I'd been part of for many years. That decision was linked so closely to other factors that it's impossible to see a clear progression: my desire to relocate to an area I'd loved for years, my interest in pursuing a line of study I'd set aside long ago, and my need to re-boot the way that I engaged with my work and with my community. These days, I'm studying at our local university, serve on two nonprofit boards, and take on independent consulting projects.

My husband also is self-employed. He's a successful writer/journalist who loves his work and takes it seriously. He's also part of an industry that's unstable at best, where "shakeup" is the new normal, and where absolutely no one seems to be able to predict what's going to happen next, or what anybody can do to prepare for it. (Not surprisingly, he's also forgotten what the word "vacation" means.) For now, at least, the income from his work is a major source of support.

Those of you who work for yourselves or live with someone who does know the  joys of self-employment, such as paying for your own benefits or doing without. We think of our monthly health insurance payment as a second mortgage, and occasionally wonder why we enrolled, since we pay all our medical expenses up front anyway ($10,000 deductible, anyone?).

So the more I thought about this supposed marital "cushion," the more agitated I felt. Eventually, I might have been waxing nostalgic about my single days, when I was financially and emotionally responsible only for and to myself, when I could make unilateral decisions about life and money based on my own capacity and tastes, and when a partner's illness or aging wasn't a part of my emotional and financial landscape. The "cushion," for me, was being in sole control (ha!) of my life.

What I was feeling during all this, of course, was fear. The fearful me was having a hard time seeing how risk-taking was easier in an environment of financial uncertainty (no-regular-paychecks R-Us), in a life that, by definition, contains the needs and wants of two people. I felt anxious about the choices I'd made and about what they would lead to. I was, as they say in psychology circles, doing some major catastrophizing and polarizing.

Fear sucks. It limits us; it shuts us down. If I'd noticed how I was feeling and understood the feeling for what it was, I might have been able to step away from a fruitless comparison to see that our conversation was less about money than about emotions. Issues related to money, we know, are nearly always about something else. Partnered or "un-," we bring to money the memories we've associated with it as children and adults. For better or worse, it reflects our anxieties and our hopes.

For me, money has always been about security, with a dash of control and pinch of scarcity mentality thrown in for good measure. I suspect that if had a multi-million-dollar bank account, I'd still find ways to feel anxious about my financial future. (Mind you, I wouldn't mind having to struggle with that.) My guess is that our money "personality" follows us around, whatever our marital or partnership status.

As for the comparison game, it's always a losing proposition, since someone's always better off, and someone else is always worse off, than we are (at times for reasons we'll never see from where we stand). I know married people with considerable financial resources who consider themselves impoverished and live accordingly; single people with few resources who live richly; and others, with or without partners, whose circumstances and views lie in between. Playing the comparison game says much more about us than it does about any objective reality that can be compared.

What's important is not the differences that we seek in these comparisons (which we make, at least in part, to defend our decisions). What matters are the commonalities, because it's through these that we can help each other. For instance, once you admit the fear that you won't have "enough" for your old age and that you'll end up pushing a grocery cart along the highway (not that I've ever had this dream myself - oh no, not me), you'll find many people who are just as scared as you are. Some of them will relate to your story and some will have a different one. But while their circumstances may differ from yours, I'll bet that their fear feels the same.

The vulnerability that comes with sharing isn't always easy for me; what's harder, though, is getting to the truth of what I'm feeling, not just  what I'm thinking.

When I'm able to share my fears with people I trust, learning that I'm not alone in what I feel almost always lightens my burden. Then I can welcome --well, maybe not welcome, exactly, but hear-- another perspective: see the bigger picture, re-frame what I thought was an impossible situation, reconsider my approach to a problem.

As to the cushion, I do have one. It's the example my husband and my friends set for me, without intending to, in the way they value doing work that they care about. It's in their encouragement of my hard-won risk-taking and their gentle honesty when I seem to be veering off my path; it's in my husband's willingness to talk things through ad nauseam because I need to make sure I've explored every (anxiety-laden) decision thoroughly.

I know that what I'm making of my life is my own doing, but I also know that I have debts I'll never be able to repay. Thank goodness they're not of the financial kind...

Update: In one of those moments of serendipity that seem to strike more often these days, I woke this morning to Joanna Macy reciting this poem by Rainer Maria Rilke.  "what batters you," says Rilke, "becomes your strength." This interview with Macy is well worth listening to. Macy is a philosopher, writer, environmental activist, and scholar of Buddhism, general systems theory, and deep ecology. Did I mention she's in her 80s? With Anita Barrows, she's translated Rilke's Book of Hours: Love Poems to God, which includes this piece.

Let This Darkness Be a Bell Tower (Sonnets to Orpheus II, 29)

Quiet friend who has come so far,
feel how your breathing makes more space around you.
Let this darkness be a bell tower
and you the bell. As you ring,

what batters you becomes your strength.
Move back and forth into the change.
What is it like, such intensity of pain?
If the drink is bitter, turn yourself to wine.

In this uncontainable night,
be the mystery at the crossroads of your senses,
the meaning discovered there.

And if the world has ceased to hear you,
say to the silent earth: I flow.
To the rushing water, speak: I am.


Image by Pinkpoppy from Flickr, under a Creative Commons license.