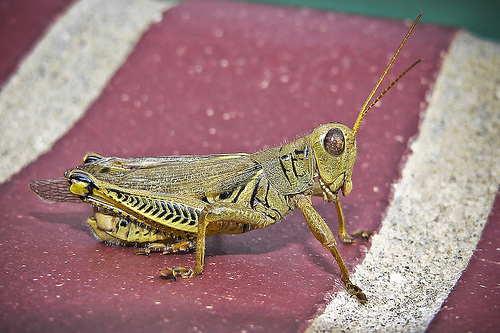 "For the poem he is writing is the act of always being awake, better than anything."  Or, as people much smarter than I have said: be here now.

In celebration of National Poetry Month, because we can never have enough good poetry in the world.

It's funny when the mind thinks about the psyche,
as if a grasshopper could ponder a helicopter.

It's a bad idea to fall asleep
while flying a helicopter:

when you wake up, the helicopter is gone
and you are too, left behind in a dream,

and there is no way to catch up,
for catching up doesn't figure

in the scheme of things. You are
who you are, right now,

and the grasshopper, the one that thinks
you're a helicopter, leaps onto your back!

He is a brave little grasshopper
and he never sleeps

for the poem he writes is the act
of always being awake, better than anything

you could ever write or do.
Then he springs away.

Email ThisBlogThis!Share to TwitterShare to FacebookShare to Pinterest
Labels: poetry