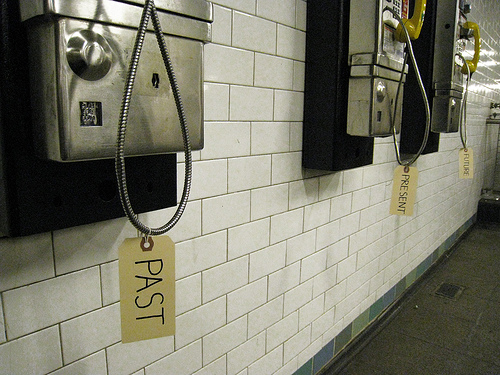 Does this sound familiar?  I'll be driving home or planting tulip bulbs or reading the paper, and I'll shift my attention to something I said in a meeting the day before or to a chat I had with a friend on the phone that morning, and I'll find something to dislike or regret.

I wonder whether I should have expressed a thought differently, or I wish I'd said something I neglected to say (or vice versa).  Sometimes I'll throw in a comparison for good measure: "Geesh, so-and-so explained Einstein's theory of relativity so eloquently that I must have sounded like a total dork when I said... Maybe I'll study up on string theory for the next meeting."

How about the companion habit: the one where I obsess about the future? Is there a part of you that believes that if you lay out all the negative things that might happen when you next visit your mother, pitch that prospective client or gallery owner, take that risk, you'll protect yourself from a bad outcome?

For years, I convinced myself that when I did this I was simply being pro-active and approaching the future with forethought. Yeah. Sure. I now see that I was letting my need for control bleed through a band-aid of worry. As if by summoning every gloomy possibility I could influence the results.

That's not to say that it's not a good practice to plan or to think things through. Just the opposite. The trick is to focus on these when it's truly useful. Considering how to approach a gallery owner who might carry your work or how to handle a conversation with your aging mother about her finances deserve their own time slots. Flashing to them when you're eating dinner doesn't do justice to the topic, to your dinner, or to your digestion.

Berating ourselves for past behavior or anticipating disaster in the future robs us of the present moment, one we'll never get back. Forget whether we're even interpreting the past event accurately, or whether worrying about what may -- or may not -- happen in the future does any good whatsoever. We already know that the most likely responses to these questions are "No" and "No."

This isn't just homespun wisdom. Although it's impossible to imagine my no-nonsense mother telling me to "be here now," I clearly remember her variation, "stop borrowing trouble," when she thought I was catastrophizing about some (usually innocuous) event in the future. She wasn't far off.

A recent scientific study by psychologists at Harvard has similar advice.

The psychologists concluded that "wandering minds" -- thinking about events that happened in the past or that might happen in the future-- are a big cause of unhappiness.

On average, the survey's subjects* spent 46.9 (!) percent of their time thinking about something other than what they were doing.


"Mind-wandering is an excellent predictor of people’s happiness. In fact, how often our minds leave the present and where they tend to go is a better predictor of our happiness than the activities in which we are engaged.” (my emphasis)

It seems that whether we're tip-toeing through the tulips on a beautiful spring day or cleaning out the sick cat's litter box, we're likely to be happier if we focus on the task at hand than if we drift elsewhere in our minds.

For me, "being present" is a major work in progress, and because "a human mind is a wandering mind," I suspect it will always be so.  I'm hopeful, though, that it gets easier. And that's enough.

-------
* The subjects ranged in age from 18 to 88 and represented a wide variety of occupations and socioeconomic backgrounds. Seventy-four percent of them were American (which, I think, may tell us something about Americans' -- and possibly all Westerners' -- tendencies to live outside the moment).

Image by d.billy, via Flickr, under a Creative Commons License.
Posted by Clara at 6:49 AM

Email ThisBlogThis!Share to TwitterShare to FacebookShare to Pinterest
Labels: Be Here Now, being present