Word(s) for the Year: One is Not Enough 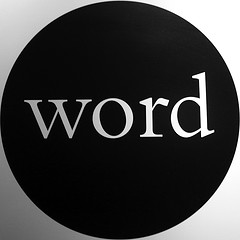 Last year, I climbed tentatively aboard the "word-of-the-year" train that seemed to be making the rounds of the blogosphere. I'd always felt compelled to make resolutions for each new year, but like 99.9% of the people who make them (I may be exaggerating the number, but I suspect it's not by much), I wasn't very good at keeping them.

To be honest, I didn't have high hopes for the Word Project either. But -- zounds! -- it worked! More accurately, it made a noticeable difference in how I made my way through the year.

If you know me, or if you continue to read this blog, you'll soon learn that I'm a sucker for structure and process. I never met a list I didn't like, and that includes the much maligned "To Do" list. So I took seriously my responsibility to choose the right word for the year.  Here's how I approached the process in 2010 (and repeated it for 2011).

First I tried Christine Kane's Word-of-the-Year Discovery Tool, which she kindly makes available as a free download on her web site. While this was useful, what ultimately was most helpful was free-writing about what I wanted most to introduce into or reinforce in my life in 2011.

I should have known that the recovering perfectionist in me wouldn't be able to settle for just ONE word, though. As I proceeded with my assignment, I quickly concluded that...

1. Clearly, I had more lessons to learn in my new year than my less encumbered one-word colleagues;
2. I seemed to need to hedge my bets in case one of my words dropped by the wayside;
3. The over-achieving multi-tasker in me needed more than a single concept to chew on.

Boy, do  I admire -- not to mention envy -- those brilliantly focused souls who zero in on the perfect overarching theme for their next year: "Expansion!" "Balance!" "Creativity!"  But not for me, putting all my eggs into one intentional basket.

Instead of arguing with myself about this (a not atypical trait in an only child, I've discovered), I accepted the fact that one word simply wouldn't do, and got on with it.

Once I'd settled on my three -- yes, THREE -- words, I wrote them often. I put them on a whiteboard in my studio and at the top of each page in my journal; I incorporated them into the wallpaper on the screen of my laptop;  I repeated the words as I relaxed in Shavasana pose in my yoga class; I shared them with my friends.  This repetition didn't give the words themselves power, but it did serve to keep my intent front and center in my consciousness, By doing this, I hoped to influence my thoughts and behavior for the better.

One of my three words for 2010, for example, was "gratitude."  As the year progressed, I found it easier to notice habits that got in the way of being grateful and of enjoying the benefits of gratitude, such as complaining about small things that I couldn't control (long, slow grocery store lines, anyone?).  Even better were the times when I found myself spontaneously giving thanks for any one of the small joys that I can so easily take for granted, like a phone call with a friend or a good cup of cocoa at a favorite cafe.

At the risk of sounding a little like a Pollyanna which, trust me, I am not, I surprised myself with my enthusiasm for the word(s)-of-the-year idea. Did I become a paragon of "clarity," "serenity," and "gratitude" in 2010? Far from it. But I raised my awareness of unhealthy patterns, and I gained more of what I'd hoped for than I've gotten from any New Year's resolution. So I'm embracing it again for 2011. More to come.

Photo by procsilas, on Flickr, used under a Creative Commons License.
Posted by Clara at 6:50 AM

Email ThisBlogThis!Share to TwitterShare to FacebookShare to Pinterest
Labels: word-of-the-year