Learning to 'Stay On My Mat,' or, Listening with Intention 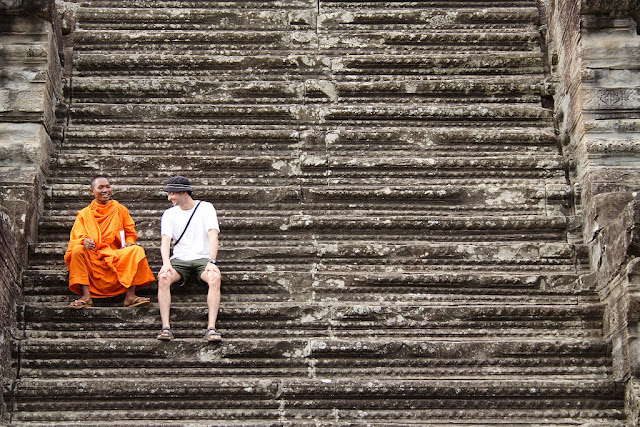 At some point during every yoga class, our teacher reminds us to 'stay on your mat; stay in the room.'  More often than not, it's just what I need to hear at that moment.  My body may be on the mat, but my mind is moving ahead to the assignment that's due the next day, or back to yesterday's dinner.

I'm finding that the longer I commit to living mindfully, the more often I have to prompt myself to 'stay on the mat.' I think it's because I'm more aware now of when I'm not in the moment --and for someone like me who likes bright, shiny objects, Not Being In The Moment is a regular event.

At first, I recognized this tendency to 'drift away' during times when I was alone. I'd be meditating, or working on a project in my studio, or like now, writing a blog post. One minute I was fully engaged; the next I was making a virtual grocery list. So I'd tug myself back to the cushion or the table or computer.

Then I started noticing the same behavior when I was with someone else. I like to think that this doesn't occur often, but it happens often enough that red flags are now going up automatically. I'm trying to see these flags as a good thing: an opportunity for positive change, even while I mourn in advance the decline of all the multi-tasking-in-my-head that I'm so fond of.

Maybe this happens to you, too. You might be having coffee with a friend, someone you care for and whose company you enjoy. She's telling you what seems to be an interminable story about taking her car in for repairs. If she were an on-air reporter covering a ballgame, she'd be doing both the play-by-play and the color. She's skipping no detail about her car's ailment. You're looking right at her, with what you hope is an interested gaze, but you stopped following the game long ago.

It's just as easy to leave the mat when the speaker isn't a friend. It can be the barista at the local coffee shop whom you don't know all that well, or a stranger with whom you struck up a conversation. You find yourself drifting, only half listening. Do we have any more or less of a responsibility to be on the mat with someone we're not close to?

[Before we go any further, let's acknowledge that we're only human, so this kind of thing --drifting off the mat, that is-- will happen. Often. Then some more. So no repeated banging of heads against walls when it does, please.]

As I was saying...Surely we're allowed a little 'drift,' right? It's not as if if the people we're talking to are saying something really important.  If they were, then of course we'd listen more attentively.

But here's the problem with this thinking. Who are we to decide what is or isn't important to someone telling us his story? And more to the point, it's not whether a story is 'important' or not that matters. What matters is the potential for grace that resides in every interaction we have with another person.

If you're lucky, you've basked in this grace firsthand. You meet someone for the first time, perhaps only briefly, and walk away feeling a little more special than you did beforehand. What you experienced, most likely, was the effect of being with someone who was wholly present in the relationship while you were together. It's what people mention most often when they describe meeting charismatic individuals: the feeling that the other person's attention was focused completely on them, as if they were the only two people in the room.

Each of us has a fundamental desire to be truly seen and heard, to feel that who we are and what we say is valued. We may not always know exactly why we feel better when this happens, but we know we want to feel that way again.

Amazingly, we have the ability to give that same gift to others. And when we're truly available in a conversation, when we're fully present in the moment, we reap the rewards too. It's no longer just a car-repair story; it transforms into a story about connecting at a profound level with another human being, someone who wants to be acknowledged and valued, just as we do.

It takes great effort to approach our relationships this way, not to mention time and sensitivity to see the results. I know it'll take giant heaping doses of all three for me. Still, my investment in 'staying on the mat' in yoga keeps paying dividends, so it seems reasonable to trust this process too. As always, news at 11.

--
Image by OliYoung, from Flickr. Used under a Creative Commons license.
Posted by Clara at 5:10 PM

Email ThisBlogThis!Share to TwitterShare to FacebookShare to Pinterest
Labels: being present, listening